min 2 – Christina about Risky: He is a very special horse for me. We looked for a Warmblood for the Feira, and I didn’t plan to lead this project or to ride a Warmblood which I never wished or dreamed about. We did plan that Bernardo should ride him, but after some days Risky showed that he is not an easy horse, he can frighten riders, doesn’t allow new people to get closer or touch him, he is arrogant and rejects people. I was pregnant and not really in a position to ride such horses (as we never knew what he will do), but Manuel asked me to do so, and I trust him. I trust his feelings, his experience, his knowledge how to develop me and horses. Risky tends to exude arrogance if you get to know him, but he can be a real friend. I feel very connected to him.

min 5:35 when did you decide to keep him? – In the beginning I was sometimes afraid if we „survive“. He was very frightened, everything scared him. Even Carlos said Risky „disappears“ in a way when he is scared. Risky is unbelievable fast and hard to ride when he is scared. But he fascinated me in a way, something special. A special bound between us. It was not his movement, it was the soul. Since February 2021 it is my horse. When we started Risky was lame in the sense of a very unrhythmic movement. Without findings by the vet, we have checked this several times. At the beginning he was always moving in that irregular movement on the lunge. He has a disalignment in the left hoof, but this doesn’t lead to that lameness. The diagonal right hindleg has a thick old windgall. Sometimes you can still see that, but it has improved a lot! But also humans have unregular movements sometimes, we are always careful and let the vet check in the beginning. But it is not always caused by an illness where you have to stop riding. Tension, muscle pain and still the natural crookedness can lead to this. We have to do the best to reduce this crookedness, but I believe no one will reduce that to zero, I don’t believe that.

min 13:45 when Manuel rode Risky while you was on paternal pause, what did you see as an observer? – I saw the potential of this horse. Manuel has an unbelievable feeling where a horse has tensions and he immediately knows what to do, so you can see all potential of a horse. I need much longer for this process, where Manuel needs seconds, we need weeks. Manuel educates us to get this feeling. It’s not about WHAT you do, but it’s about HOW you do it. Sometimes we go in an extreme to end in the balanced middle, think about our more lateral or more bended shoulder-in. Although the books say this is not classical, for us this classical movement is the goal, but on the way, you sometimes need to mobilize more. We use that mobilization later to react on other issues, it is a way.

min 18:00 the picture of Christina on Risky in extended trott – Some people did massive criticism. With Risky it’s not easy to get there. Of course, this picture is NOT fully ideal. Or perfect. But I see the big, big step a horse like Risky has to do to be there, and it was a magic moment. For sure, you can always find something to improve. Everybody has to improve, we are not Lörke, or Nuno Oliveira. For me, this was an perfect moment with this horse. I never say this IS the general perfect picture. But for me, it was in that moment. I’m not familiar to ride warmbloods, for me the movements of him was also difficult. To ride him outside, in all these Grand Prix movements, while we paused from the film records for Vertical, this was magic for me. Once so crazy and unreliable, and now we can ride outside, everywhere, in every movement. Second point – I usually rode him in the Portuguesa saddle, as he was that difficult in the beginning. So I decided to change to a dressage saddle from Kriemhild Morgenroth, to improve my seat and to proof my soul we can do that. Yes, for sure I can improve my seat and Kriemhild helped me. Risky is really not easy to sit, as he has a lot of power. It was great and success for me, that we could do something like this picture. A picture has not only the technical part, it also has that emotional part and side. There was a similar situation in the Marty stables, for that soiree, and I was a bit afraid, new stable, the journey, music, tables directly next to the arena where people eat – but Risky was totally focused on me.

min 27:25 what would you say people when judging pictures? – Look more with the heart. Really, look more with your heart and not with a ruler. See what that picture says to you, not if you find this or that failure. – Isabella Sonntag adds, stop to judge pictures from riders you don’t now. You can always find or make bad photos if you like to. – I would never do so. I can see if a photo is good, or bad, but you will never find a negative commentary to photos and riders, I don’t know. I wouldn’t do that. You can’t judge a rider or a teacher while seeing one or some photos. The real riding is the important thing, not one photo. – Isabella Sonntag advices to come and see, take some days to visit the stables before you judge a picture. – I often hear from people, that have been here the first time: Risky is an unbelievable proud horse. This is something you can see live, but maybe not in a video or photo. 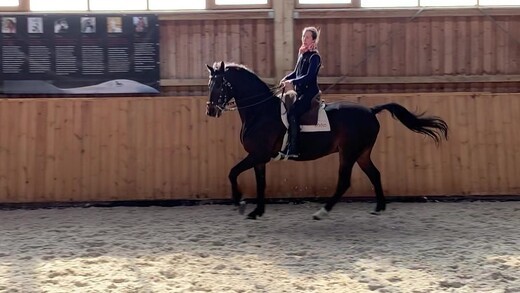 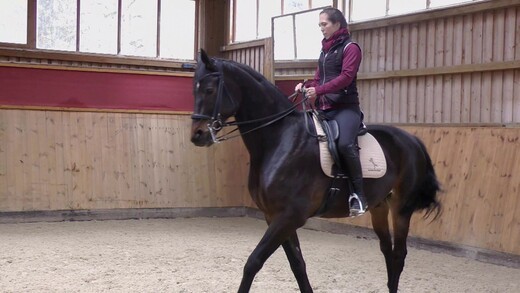 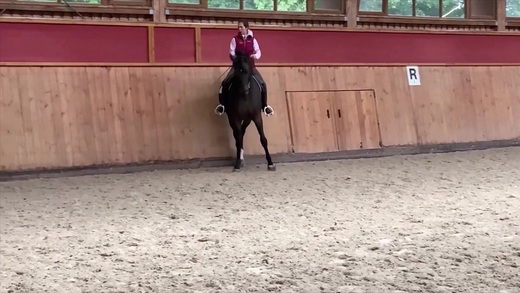